Why was there no rooftop evacuation?

Home/9/11 Commission/Why was there no rooftop evacuation?
Previous Next

Why was there no rooftop evacuation?

In my book, Unanswered Questions, I tackle just a dozen of the questions the Family Steering Committee asked the 9/11 Commission which their 2004 Report ignored. One of these is related to the decisions not to have any evacuation of the Twin Tower rooftops. In February 1993, the North Tower rooftop had been the site of successful evacuation of over four dozen occupants when a truck bomb exploded in the basement of the tower. The Family Steering Committee asked the 9/11 Commission “Why was there no roof-top evacuation?”

Here is a detail I didn’t delve into while writing Chapter 14 of Unanswered Questions. It wasn’t uncommon for tourists visiting the towers to go up to the rooftop of the South Tower to take photos and look at the scenery of Manhattan, the Statue of Liberty and across to New Jersey and Long Island. Port Authority officials explained to reporters after the attacks, why the roof-top doors were locked. They claimed there was a concern that occupants fleeing for their lives might vandalize the expensive broadcasting equipment on the roof-tops. They also alleged that people reaching the rooftop of the South Tower (or North Tower) might commit suicide. Yet, tourists had been on the South Tower rooftop, taking in the scenery of Manhattan for the past 38 years. The rooftop was open to the public from 9:30 AM to 9:30 PM on a daily basis for 38 years. In photo above, a tourist stands at entrance to outdoor WTC South Tower rooftop

The Port Authority collected decades of admission fees from tourists who hung out on the rooftop of the South Tower without incident. They didn’t ask tourists to fill out mental health forms, or ask them if they felt suicidal before heading to the open roof deck. No one had committed suicide. No one had vandalized broadcasting equipment. The Port Authority kept accepting admission fees from tourists daily, week after week, month after month, year after year, decade after decade. To publicly fret that providing access to the rooftops on September 11, 2001, would have resulted in suicide and vandalism is misleading. It invites the reader of a news story to accept an explanation that doesn’t match with the lived experience of the Port Authority. The Port Authority had a business model that counted on a revenue stream of tourists constantly having access to the South Tower rooftop to rest on railings, and get photos of the cityscape. As the rooftop was accessible for twelve hours a day, 365 days a year. If the Port Authority had as many as 90 people going to the rooftop on an hourly basis, they would have over a thousand visitors a day exploring the open air South Tower roof top to take photos. Had the Port Authority been concerned about people committing suicide or vandalizing broadcasting equipment on the Twin Tower rooftops, they wouldn’t have made the rooftop of the South Tower available for access over the previous 38 years.

After the towers collapsed on September 11, 2001, visual artist and photographer, Thomas Kuijpers, had an exhibit in Amsterdam titled “When the Twins Were Still Beautiful.” The exhibit ran from mid-December 2015 to end of January 2016. The gallery write-up stated “Researching events by collecting material around a topic of interest is usually the starting point of Thomas Kuijpers’ artistic practice. Browsing the media landscape, he investigates how image and text are used to create a narrative about true events. With a major interest in the way the representation of an event is constructed, the works mostly originate from recent happenings, questioning the value of the image and its contemporary uses. By pointing out inconsistencies in the story and its imagery, or making harsh visual comments on the way the story is delivered, Kuijpers shares an alternative on stories and images we’ve all already seen countless times.”

The Foam 3H Gallery said about the visual artist: “Thomas Kuijpers studied photography at the AKV St.Joost, Breda, and is represented by LhGWR, The Hague (NL). Earlier this year he had his first solo show Paradigm #01 at B.A.D., Brussels (BE). The past few years his work appeared in several group exhibitions and has been acquired for the collection of the Stedelijk Museum Amsterdam.”

Here are some of the photos of tourists at the roof-top of the South Tower in the few years prior to September 11, 2001: 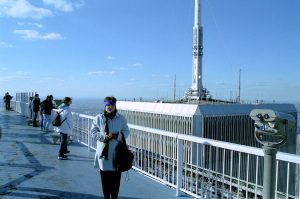 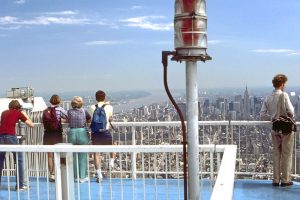 Many more photos were taken by tourists visiting the South Tower rooftop between April 4, 1973 and September 10, 2001. 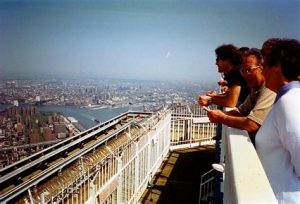 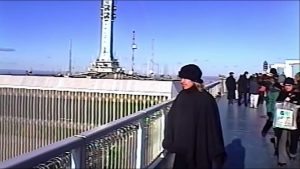 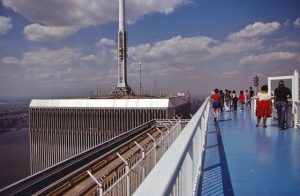 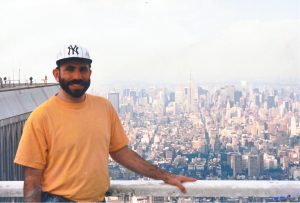 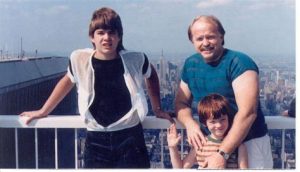 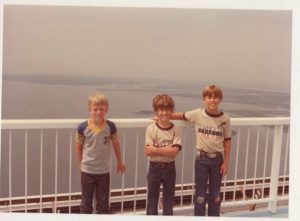 At 9:30 AM on September 10, 2001, Palm Beach (FL) resident, Ryan Levey, visited the World Trade Center. He took elevators up to the rooftop of the North Tower. (See photo below) On September 11, 2001, Port Authority staff told the press that the rooftops to both of the Twin Towers were locked. They gave the impression that this was routine, and that the rooftops were not accessible to the public, or to occupants. This despite, the WTC daily selling tickets to tourists up to and including September 10, 2001, for $13 to access the South Tower rooftop.

In an email from architect Bill Brinnier, he related a story of being taken to the rooftop of the North Tower by his friend and colleague Frank DiMartino. “Frank brought my brother and me onto the roof of the North Tower on August 11, 1995, so that we could photograph a “fly-by” of WWII aircraft in celebration of the 50th Anniversary of the end of WWII.  We spent the whole afternoon up there.  It was like we owned the place and we had it all to ourselves.  We could see the tourists up on the platform of the south tower rooftop observation deck.  It was crazy being 1,500 feet above the streets, looking down trying to spot aircraft flying between the statue of liberty and the George Washington bridge. A day I will never forget.”

The 9/11 Memorial & Museum, dedicated to those who died on September 11, 2001, includes a massive assortment of objects, images, video and audio for visitors to apprehend. One of these is a photo of Winnipeg, Canada, resident Evan Kuz, who was at the South Tower Observatory at 7:00 PM, the night of September 10, 2001.

From Writing the Sacred to Unanswered Questions

From Writing the Sacred to Unanswered Questions

9/11 Commission and Conflicts of Interest

9/11 Commission and Conflicts of Interest