9/11 FROM DUST TO DECEIT, FROM BUSH TO BUTCHERY 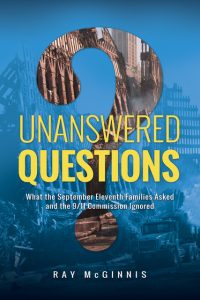 If you can handle the truth, read this book.

Unanswered Questions is a brutally persuasive book for those who want answers to the real origins of the Afghanistan War. Ray McGinnis book digs deeper and hammers harder for the unvarnished  truths. Ex-President Bush, currently on a good-guy speaking tour speaks without remorse or responsibility for the unmitigated catastrophe he set in motion 20 years ago. President Bush famously said, in another of his primitive statements that everyone seemed to relish, “Every nation, in every region, now has a decision to make. Either you are with us, or you are with the terrorists.” But he rejected an offer by the Taliban to hand over bin Laden in exchange for the U.S. to stop bombing their country. He wanted that war. He must be held responsible.

Bob McIlvaine, whose son Bobby McIlvaine Jr. died while entering the North Tower lobby calls the headlines about Saudi Arabia “a distraction, a joke.” McIlvaine, whose family story was featured in the Atlantic Monthly this September, calls for a new independent investigation. He wants it to include legitimate suspects in the former Bush White House, and other private citizens working for think tanks or corporations, and have them testify under oath.

Some families are hopeful that President Biden’s September 3 Executive Order on Declassification Review of Certain Documents Concerning the Terrorist Attacks of September 11, 2001, will clear the air. But others worry what “certain documents” will be declassified? Will there be other documents kept sealed, possibly harming American national security or implicate the US government. Jersey Girls Kristen Breitweiser and Lorie Van Auken have said they are suffering from PTBS – Post-Traumatic Betrayal Syndrome.

Over 8 Trillion was spent on the Afghan War. Americans have watched TV reports of the botched withdrawal. They wonder what has been achieved. Some families still wonder why President Bush authorized plans for attacking Afghanistan prior to September 11, 2001.

On September 19, 2021, former President George W. Bush was interrupted during a speech in Beverly Hills by Iraq War veteran Mike Prysner. He accused George. W. Bush of lying to the American people about Iraqi involvement in the Sept. 11 attacks, and Weapons of Mass Destruction, and the murder of over a million civilians.

Most of the questions the families asked remain ignored. The history we teach our children cannot be based on a false narrative and understanding of what really happened two decades ago. Many families, first responders, and veterans of wars in Afghan and Iraq are still waiting for truth and accountability.

Unanswered Questions is a must-read book on the crime that quite literally altered the face and fate of America. 9/11 became the turning point of the great American experiment, the moment when Americans began to truly question their government? Why were 9/11 Commissioners so obsequious and deferential toward the families, while ignoring their questions during the investigation?

Recall too that the 9/11 Commission considered a criminal investigation into NORAD and Pentagon official’s testimony, with seven different contradictory stories regarding the military response to the hijacking. And did the whole event herald a heady time for already rich Republicans for public piety, profits, and unbridled global military power, all joined at the hip by the War on Terror and money.

Never forget the money that came pouring into politicians’ coffers by corporate America and others that expect a payback. Don’t forget Government won the big prize, Monopoly control, and the power of the state to turn their ideology into the law of the land.

Ray McGinnis was raised in the United Church of Canada. He holds a B.A. in Religious Studies from the University of Toronto and a Diploma in Christian Education from the Centre for Christian Studies. His theology and educational approach has been influenced by the work of René Girard, Jim Wallis, John Cobb Jr., Walter Wink, Rosemary Radford Reuther, Mary Joe Leddy, William Sloane Coffin and Mary Elizabeth Moore. In between 1981 and 1985 he worked as a Christian Education Director in three congregations (variously United Church of Canada and Presbyterian Church of Canada) in the Greater Vancouver (Canada) area. Simultaneously, he worked part-time for the Vancouver-Burrard and Vancouver South Presbyteries of the United Church of Canada as a regional Minister for Youth and Young Adults. He has served as national staff for Youth & Young Adult Ministries with the United Church of Canada (1986-95). In that capacity he organized national conferences for youth and young adults, leadership development events, voluntary service projects and for 4 years partnered with the United Methodist Church on their Youth! Magazine. From 1995-99 he was program staff with the Naramata Centre in British Columbia, hiring youth leaders, and co-leading a yearly 4-month residential program for young adults in spiritual growth and community formation.

Since 1999 he has been a free-lance presenter of journal writing, poetry, and memoir workshops to over 15,000 participants. He has taught at business conferences, colleges, theological schools, retreat settings, churches, synagogues, grief and loss support groups, schools, mental health settings, hospitals, and professional development days including for first responders, and lawyers. In 2005 he authored Writing the Sacred: A Psalm-inspired Path to Appreciating and Writing Sacred Poetry. His newest book is Unanswered Questions:What the September Eleventh Families Asked and the 9/11 Commission Ignored (September 2021).

McGinnis believes the stories of the families of the victims of September 11th, and their efforts to establish an inquiry into the attacks, offer a doorway for theological reflection about what it means to live in a post-9/11 world. Toward that end, a free PDF Unanswered Questions Study Guide created for use in Christian congregations will be available on his website,
www.unansweredquestions.ca, in September 2021. The study guide can be adapted for use by study groups in other faith traditions, as well as secular book groups. He has also co-led tours to Thailand and Bali. McGinnis enjoys walking, cooking, hiking, reading, history, theatre, literature, film, writes song reviews, and lives in Vancouver, Canada.