Carie Lemack is the daughter of Judy Larocque, who died at age 50 as a passenger on American Airlines Flight 11 on Sept. 11. The plane was on route from Boston to Los Angeles. However, it was flown into the North Tower of the World Trade Center. Carie Lemack, who lives in Cambridge, Massachusetts, co-founded and was Vice-President of Families of September 11th.

The New York Times wrote in a profile on October 13, 2001, “Judy Larocque founded and led a small company in Framingham, Mass., called Market Perspectives, and she had a golden retriever named Naboo. They were pillars in her life, said their daughters, Carie and Danielle Lemack. More than that: the dog and the company were her children, too…. Ms. Larocque, 50, had been seeking a new balance of work and life recently, and did so with the intensity she brought to everything. She walked 60 miles for a breast cancer fund-raiser in May, and had rediscovered a passion of her youth: yoga.”

The Boston Globe noted in a September 22, 2001, obituary that “Ms. Larocque graduated from Boston University with a degree in psychology.” The newspaper noted that prior to running her own business, she had worked for a variety of technology companies. These included “Digital Equipment Corp., MassComp and BBN.”

Carie Lemack has written about her quick shift to advocacy, even as she grieved the loss of her mother. “A few weeks after 9/11, I made a call to George Williams. A friend had found his number on the Internet and insisted I call. Although I did not know it, Mr. Williams had advice I needed…. After losing his son, Geordie Williams, a passenger on Pan Am 103 in December 1988, Williams was one of the most active family members fighting for justice. He became president of the largest Pan Am 103 family group, and was well versed in counterterrorism advocacy. His work included fighting Libyan President Gadhafi to arrange extradition and eventual conviction of the men who checked the fatal bomb onto his son’s plane. He also butted heads with the U.S. State Department to change laws governing state immunity from lawsuits where those states sponsored acts of terror. The Pan Am 103 families, and George in particular, even lobbied the United Nations to impose sanctions on Libya (valued at over $23 billion). If there was an expert in being a terrorism victim’s family member, George was it.

‘Bring a sign-up sheet,’ he said. ‘At the FBI briefing, bring some paper and pens, because that’s the only time you can get the names.’ Williams knew that bringing together victims’ families was no easy task. There is no list of victims’ families’ names that the FBI, the Red Cross, or anyone else will give out. Such a subtle point, but at that time, the most important piece of advice I could get.” Lemack became a member of the Family Steering Committee for the 9/11 Independent Commission.

In August 2007, Carie Lemack published an article in the UK journal Studies in Conflict & Terrorism. Her article was titled “The Journey to September 12th: A 9/11 Victim’s Experiences with the Press, the President, and Congress.” In it she reflected “On 11 September, the whole world watched my mother being murdered on television. Millions have seen that footage time and time again since then. I have not. In fact, inadvertently viewing her murder is now one of my greatest fears. For my sister and me, and for others who lost loved ones on 11 September 2001, this is part of our new reality. My mom, Judy Larocque, was a passenger on American Airlines Flight 11. It is not something one expects, after losing a parent, to have to be constantly vigilant that someone might show her final moments on television, but this is one of the bizarre aftermaths that still plagues me.”

Commenting on how people grieve differently, Lemack observed “For my sister and me, some differences were harder than others. She could not bear to sort through Mom’s clothing and found it difficult to consider the thought of wearing any of them, even though they had often “shared outfits” the way close mothers and daughters can. I, on the other hand, felt closer to my mom by putting on her t-shirts and sweaters.

By contrast, I was less able to bear and appreciate the well-meaning attention of the people who descended on our house after Mom’s murder. My sister took great comfort in their interest and support.”

Six years after the attacks, Lemack reflected “A wise woman once said to me: “I just want to get to September 12th.” Recently widowed, the mother of three young children, she was exhausted living in the shadow of the day her husband and the father of her children was taken from them, only to return in 11 different pieces many months and years later. For so many reasons, reasons only those affected will ever truly understand, some of us are still stuck on 11 September. The day surrounds us, whether invoked in television commercials or presidential campaigns. It might be included in a made-for-TV special or in “commemorative edition” books at the local bookstore. Perhaps this article is part of my journey to get to September 12th.”

In 2010 Carie Lemack produced the documentary Killing In The Name. 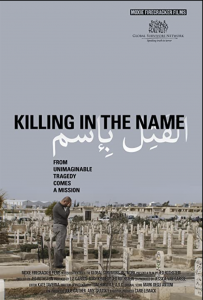 The subject of the film concerns how in August 2005 Ashraf Al-Khaled and his bride were celebrating what was supposed to be the happiest day of their lives, when an Al-Qaeda suicide bomber walked into their wedding and blew himself up, killing both of their fathers in front of their eyes. The couple lost 27 members of their family that day. Ashraf decides to raise the taboo subject of terrorism in his Muslim community. The film was nominated for an Academy Award in the Best Documentary Short category at the 83rd Academy Awards on February 27, 2011.

In 2011 Lemack produced the documentary Five. The website IMDb.com gives this summary: “The documentary gives a voice to five victims who have suffered terrorist attacks in Pakistan. They speak about the pain, suffering and loss of life the senseless attacks have caused. Muhammed Irfan Malik lost his eldest daughter, Sayed Ali Shah lost his limbs, Nawab Sher, lost his brother, Waqar Khalid had 90% burns, Tahir Malik lost his wife all due to terrorism. ‘Five’ is a documentary that goes behind the news headlines and puts faces to the victims, it is an in-depth portrait of the continuing suffering caused by acts of terrorism.”

In 2012, Carie Lemack produced the documentary Samiulla’s Story. The documentary told how “on October 28th, 2009, Samiulla’s father was killed in a blast at Meena Bazaar in Peshawar, Pakistan. During the funeral, his uncle asked him not to be sad. He said, “Do not cry for your father because now it is you who has to be the responsible one. Either go to school or go to work in a shop. You will have to be strong.” For Samiulla, the choice was clear. To provide for his family, he had to give up on his dreams of going to school to support his family.”

In her bio as a member of Families of September 11th, it states that Carie Lemack “…continues to pursue activities and legislation supporting the Commission’s recommendations. A founder of FOS11, she spearheaded a campaign to develop warnings and increase awareness of the effects of the media’s use of real-life graphic 9/11 images. Currently running her own national security business, The Camilla group, LLC, Carie remains focused on working with government, private sector and nonprofit organizations to improve the nation’s safety and security, and is leading a project to prevent nuclear terrorism in conjunction with the Nuclear Threat Initiative. Carie has an MBA from Stanford University as well as a Masters degree in public administration from Harvard University’s John F. Kennedy School of Government.”